skip to main | skip to sidebar

So I finally got the Hummingbird Bakery Cookbook, which I've been after for ages, and at the same time I got Rachel Allen's Bake. They arrived this week and I wanted to test a couple of recipes, so I chose the Black Bottom Cupcakes from HBC and Oat and Vanilla Cookies from Bake.


The recipes in both books were really easy to follow and I started off with the cupcakes. They are really rich chocolate cupcakes with a dollop of cheesecake mixture on top.

Here's a picture of the page in the book, depicting what they are supposed to look like: 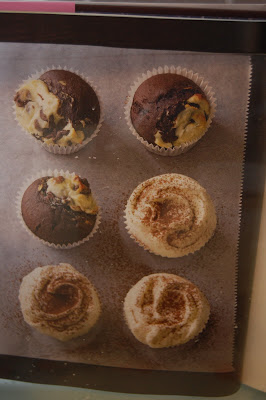 And here are my finished cupcakes: 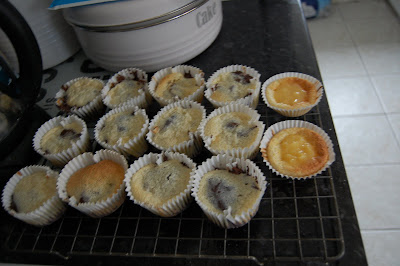 As you can see, they do not remotely resemble the picture, however they are still pretty tasty. I'm hoping that a lot of photoshopping and food-teasing was involved to take the original picture.

First I mixed all the ingredients for the chocolate part in my old, Freecycled fod mixer. The colour was this delicious brown and it smelled great. 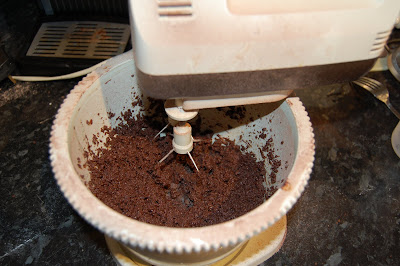 The mixture was really thick and gloopy, I think because no eggs were called for. It was hard to get it into the cupcake cups and I was very tempted to eat it raw out of the bowl!

After that I made the cheesecake mixture and I think this is maybe where things went wrong. The mixtue was really runny, even though I used the amount of liquid (eggs) called for in the recipe. I think in future I would use more cream cheese to thicken the mixture up a little. 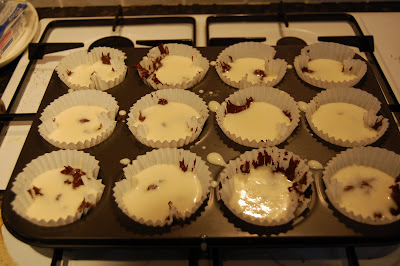 They taste really rich and dense, especially the chocolate part, and I think I would make some modifications if I make these again. Since the cheesecake part was a bit runny it went crumbly in the oven.

While the cakes were baking I made the cookies. This was really easy but I added quite a bit of water to the mixture as it wasn't forming the dough well enough with the dry ingredients. After a while cooling in the fridge, I baked the (tiny) cookies, which grew a little in the oven to resemble this: 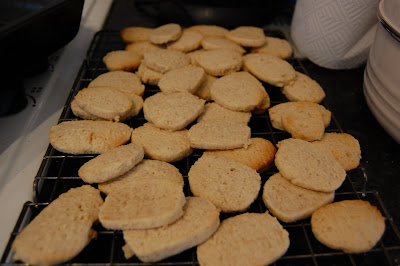 No photo comparison for this one but let me tell you that they do not look like the picture! Somehow Rachel Allen managed to make hers perfectly round which I found impossible! They taste good though and will be coming to work with me tomorrow.

I love these two books and can't wait to make more from them. Guy is making fondue in squash from Bake tonight, to have with smoked salmon and potato wedges, I can't wait!
Posted by Ellie at 18:53

Widgets for Etsy Sellers
Powered By